National Academy of Sciences of Ukraine

The cluster structure of the PIMEE G. E. Pukhov NASU
The cluster is built according to the classic scheme. Contains one controller and three computing nodes that are connected by two networks – computing (Infiniband) and service (Gigabit Ethernet): 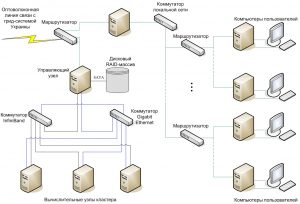 Key Features
Both the manager and compute nodes of the cluster are built on a high-performance server platform Superserver 6015T-INFB and include two Quad-Core Intel® Xeon® 2 GHz quad-core processors (E5405, FSB 1333 MHz, 12 MB cache) and 8 Gb (four 2 DDR2 DIMM 667 MHz Gigabit Ethernet, ECC) RAM each.
The combined peak performance of 24 cores on computing nodes available to external users is 192 Gflop. Real productivity achieved on the LINPACK test – 163 Gflop (about 85%).
The control node also has a 500GB RAID array. On computing nodes, local hard drives with a capacity of 80 GB are used to cache temporary data.

Appearance
The cluster is mounted in a standard 19-inch server cabinet in a properly prepared room. 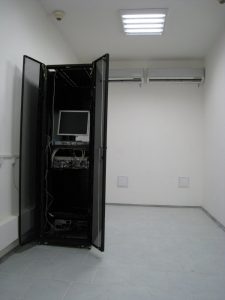 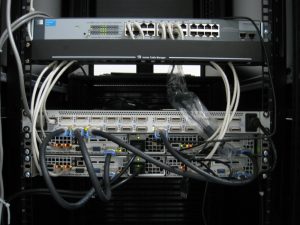 Grid-node
Works on grid themes at the Institute are carried out since 2007. Since October 2008, the site is available to grid users in the round-the-clock mode. In 2012, Grid-node of IPEM G. E. The UAV-POWEON Fuzhou National Academy of Sciences named UA-PIMEE was registered and certified in the European grid community of European Grid Infrastructure (EGI – http://www.egi.eu). The information on the grid node status is highlighted in the monitoring of the NordoGrid International Consortium (http://www.nordugrid.org/monitor/loadmon.php).

Virtual organization MatModEn
In 2011, on the basis of IPEM clusters. G. E. Pukhov NASU and the Institute of Mathematics of the National Academy of Sciences of Ukraine created a virtual organization “Mathematical modeling of energy problems” (MatModEn) to support research in the field of mathematical and computer modeling of complex technological processes, including in power engineering